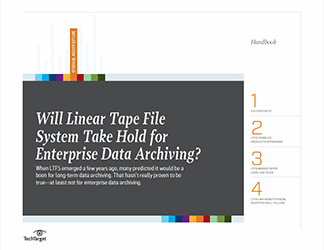 LTFS or Linear Tape File System allows data on LTO-5 and later tapes to be searched as if it were on disk. When LTFS emerged a few years ago, many predicted it would be a boon for long-term data archiving. That hasn't really proven to be true -- at least not for enterprise data archiving. The technology has taken off in the media and entertainment industry, and other industries that require long-term retention of video, but LTFS integration has been slow among tape library and backup software vendors.

That may be changing, however, with a number of tape library vendors announcing library-wide LTFS support. It is possible that some of the latest developments in this space along with the push to store vast amounts of data for analytics may push LTFS into use for enterprise data archiving, but it is still unclear if the technology will move beyond its current niche.