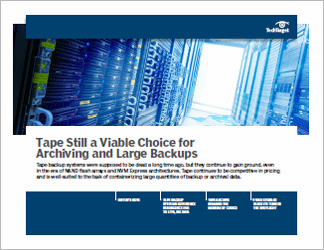 No, the tape storage system isn't dead yet. This Drill Down explores how it lives on, mainly for archiving and with a boost from new technologies such as LTO-7 and Linear Tape File System, or LTFS.

The seventh-generation LTO specification released in 2015 more than doubled the maximum compressed capacity to 15 TB and increased the data transfer rate to 750 MBps. LTO-7 also improved the bit error rate to a significant degree. The LTO Consortium already has LTO-8, LTO-9 and LTO-10 on its roadmap, each with significant capacity and performance improvements. For instance, draft specs for LTO-8 call for 32 TB of compressed capacity and sustained data transfer rates of up to 1,180 MBps.

These tape storage system advances become more important as speedier technology such as solid-state drives raise users' storage performance expectations. The performance and capacity gains also come as tape faces increased competition from the cloud for archiving. While cloud providers can store data cheaply, it can take a long time to get data in and out of the cloud.

LTFS creates partitions on tape and stores catalog information about files written to that tape. That makes it much easier to find and access files on a tape storage system than was possible before LTFS. Also known as tape NAS, it has been hailed as a tape's savior. While it hasn't caught on wildly, it is used by industries such as media and entertainment that make frequent use of archived tapes.

Eric Slack is a senior analyst for Evaluator Group, an IT ...Read More