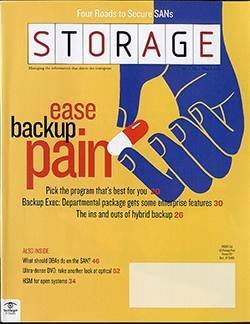 Recently, an increasing number of clients have been asking me about replacing tape with disk in some--or all--of their backup infrastructure. Until recently, the cost of tape was far less per unit of storage than any other media. It is easily transportable, making off-site storage possible. In addition, newer tape technologies have increased both speed and capacity dramatically. So why do people want to replace it? Typical complaints about tape focus on four areas: Performance. Because it's serial, tape is perceived--rightly or wrongly--to be slower than disk. Reliability. Everyone who has dealt with backups has experienced tape failure: they wear out, get mishandled or just go bad. Handling. Removing cloned tapes from a library, adding scratch tapes and cataloging bar codes--tape handling can be a nightmare, especially given the ever-increasing number of tapes. Cost. Tape media costs and tape off-site storage costs are budget line items that continue to soar. However, upon closer analysis, one finds that these really aren't ...