Tape Automation for the Masses 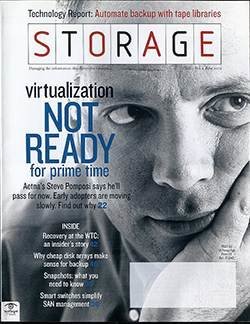 Forget serverless backup; forget NDMP. Forget all those fancy-shmancy backup schemes. For most IT shops, backup still happens the old-fashioned way: from the host to a direct-attached standalone tape drive. Increasingly, though, the price for low-end backup devices is putting automation within reach of smaller shops. Take for example, the new LIB-81 StorStation from Sony: equipped with a single AIT drive and up to eight cartridges, the 1U device holds up to 2.08TB, and has data transfer rates of up to 112.3GB, starting at $4,500. Today's small libraries can provide over a week's worth of unattended backup, says Fara Yale, chief analyst at Gartner's computer storage service, and should "pique the interest of many companies looking to upgrade from a standalone storage solution." In a similar vein, Quantum has its new SuperLoader, a 2U deal that comes with either an SDLT or DLT1 drive. Both models come with either eight or 16 cartridges. Entry price for the DLT1 model is $4,999; the SDLT model starts at $6,500. Compaq also resells ...