A little more than 60% of our survey respondents say backup takes too long. Rapidly growing capacity and backing up virtual servers seem to be the culprits.

Everyone knows backup is a pain in the #@&*%!, so a little relief would be more than welcome. A year and a half ago when we first asked, 46% of respondents said backups just take too darned long. If this is a good news/bad news story, that was the good news, because today a whopping 61% cite the same issue as their biggest backup problem. Fifty-eight percent say rapidly growing capacity is a big contributor, while 52% point a finger at backing up virtual servers. Nearly three-quarters (72%) are backing up virtual servers and/or desktops, and they give themselves only a passing grade for their efforts. On a scale of 1 to 5, where 1 is “terrible” and 5 is “great,” 50% rated their virtual machine (VM) backup processes at a so-so 3. Our respondents hope dedupe will be a remedy, with 58% saying they’ve implemented it or plan to. But before you say hooray for technology, note that the same percentage plans to just throw more disk at the problem: Our respondents plan to purchase an average of 35 TB of disk storage just for backup this year. 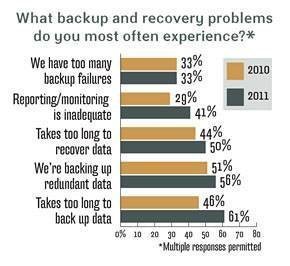 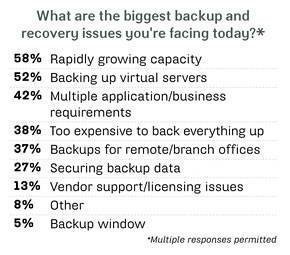 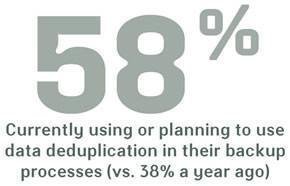