Backup and recovery can often seem like eating your vegetables: You know you have to do it, but you don't have to like it. Among all of the product categories surveyed for the Diogenes Labs– Storage magazine Quality Awards, backup and recovery (B/R) has generated the lowest overall scores. User satisfaction apparently remains elusive, as our 2006 survey yielded even lower scores than the 2005 edition. There's also a greater separation between the top and bottom scores, and one out of three respondents wouldn't make the same purchase decision today if they could do it again.

Perhaps the relative antipathy toward B/R is the result of the attention it requires.

"There's no backup solution in the world that doesn't require daily intervention," said Lynn Haueter, senior systems engineer at Alliance Coal LLC, Tulsa, Okla. "It's not a ship that you can put on autopilot."

But not all of the B/R survey results are bleak, as three products significantly increased their scores compared to last year. BakBone Software Inc.'s NetVault, which came in near the bottom in 2005 with a weak 4.60 overall score, was a surprise enterprise-class winner this year with a strong 5.97 (see the "Overall rankings" section of the "Rankings of enterprise backup and recovery software" chart). NetVault's score surpassed last year's winner, CommVault Inc.'s Galaxy, even though Galaxy's score improved from 5.32 to 5.59 (second place). Hewlett-Packard (HP) Co.'s OpenView Storage Data Protector fell from second place to third with a 5.13. IBM Corp.'s Tivoli Storage Manager (TSM), Symantec Corp.'s Veritas NetBackup and EMC Corp.'s NetWorker—which combined control the majority of the B/R software market—all finished in the bottom half of the finalist group. TSM's 5.04, Veritas NetBackup's 4.68 and NetWorker's 4.66 were all slight declines compared to last year's scores. Syncsort Inc.'s Backup Express didn't have enough responses to be statistically valid, but it still wouldn't have been a contender based on the responses it received. CA Inc.'s BrightStor Enterprise Backup was not included in the 2006 survey because the company discontinued new sales of the product a year ago. 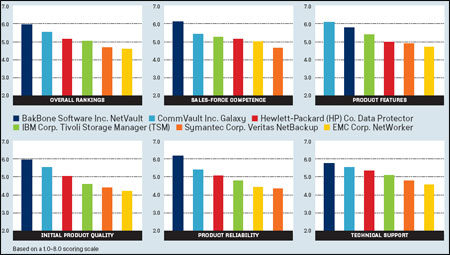 How much with how many

For 2006, we also asked how much storage was backed up by respondents and how many administrators they used. Out of the 442 respondents who supplied this information, 131 (30%) use two administrators, while 357 (80.1%) use five or fewer. Of the 25 organizations that use 20 or more administrators, most were in the financial or IT services industries.

Recent market hype regarding disk-to-disk backup prompted us to ask which backup software applications are used for this function. It came as no surprise that IBM's TSM had the largest number of such users (84.5%), as disk staging is part of its basic architecture. "It does it really well," said Alliance Coal's Haueter of TSM's disk-based backup prowess. But we were surprised that CommVault Galaxy was almost as high (81%), while products like Veritas NetBackup and EMC NetWorker were relatively low (49.7% and 34.3%, respectively). We were also surprised to see EMC Retrospect used for disk backup by 57.1% of its users, a high percentage for the SMB group.

"We were switching from backup to tape, to disk-to-disk-to-tape backup," said Keith Price, system administrator at Johnson & Wales University in Providence, R.I. "Since we were doing a significant redesign, we went through and did a full investigation into which product would work best for us."

That re-evaluation resulted in replacing Veritas NetBackup with CommVault Galaxy. "They [CommVault] came out better priced and seemed to be a better product," Price said.

BakBone the overall winner, but beaten out by CommVault on product features: Page 2.