Network bandwidth limitations can have a major impact on the backup process. Often times, organizations must back up huge quantities of data and moving such large amounts of data across an Ethernet network simply is not efficient. Even if the quantity of data that needs to be transferred is not an issue, the backup process can be disruptive. If the local area network is already congested, adding backup-related traffic to the existing network traffic will have a negative impact on performance.

One way to alleviate these problems is to move the backup process off the local area network altogether. This can be accomplished through a technique called a LAN-less or LAN-free backup.

The idea of LAN-free backups is not new. At one time, it was common for tape drives or other backup devices to be connected directly to the servers that were being backed up. This approach allowed the data to be written to tape with maximum efficiency because the data never had to traverse the LAN. Today, the use of direct-attached backups only works in the smallest of organizations, and even then, server virtualization can prevent the backup process from working as well as it should.

Most of today’s LAN-free backup solutions involve routing backup traffic through a Fibre Channel SAN as opposed to routing the traffic across the LAN. Some smaller organizations that do not have a SAN use a similar technique by creating a dedicated LAN segment (usually a server-backbone segment) specifically for backup traffic. Although this approach does prevent backup traffic from congesting the production LAN, it does not deliver the same performance benefits of a SAN-based solution.

If you look at the chart below, you will see a comparison of the theoretical maximum amount of data that the various networking types can carry per second. At first glance, it would appear that Ethernet is a faster medium than Fibre Channel. However, all is not what it seems.

Although this chart makes it seem as though Fibre Channel and Ethernet offer comparable speeds, real-world performance tells a different story. There are a couple of reasons for this. First, Ethernet has a high degree of overhead. Before data can be moved across an Ethernet network, the data must be encapsulated into frames. The numbers shown in the chart above do not take this overhead into account. The chart displays the theoretical maximum transfer rate without taking overhead into account. Fibre Channel also has some overhead that prevents these theoretical maximum transfer rates from being reached, but Fibre Channel has much less overhead than Ethernet. Simply put, Fibre Channel is much more efficient (and therefore faster) than Ethernet networks of comparable speeds. In fact, 8 Gigabit Fibre Channel tends to deliver better performance than 10 Gigabit Ethernet.

The other reason why the numbers in the chart do not paint an accurate picture is because components such as disks and CPUs can create bottlenecks that further degrade the overall performance. 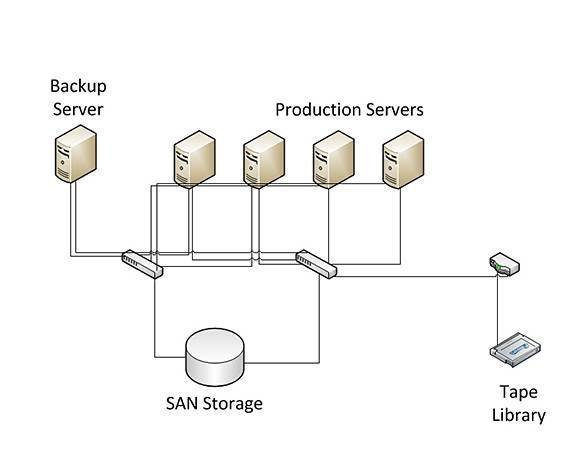 Figure A: Tape drives and backup servers can be connected directly to a SAN

You will also notice in the figure that the tape library is also connected to the SAN rather than the LAN. Today, this is relatively easy to accomplish because some tape library vendors offer Fibre Channel tape drives. However, some of the vendors still only produce SCSI tape drives. If you need to attach a SCSI tape drive to a SAN then you will have to use a Fibre Channel to SCSI bridge (sometimes called a data router or a data mover).

Moving backup traffic off of a production LAN and onto a SAN can help reduce LAN congestion. Because SANs operate at higher speeds than LANs, SAN-based backups can typically complete backups more quickly than would be possible if the data had to traverse a LAN.

About the author: Brien M. Posey, MCSE, has received Microsoft’s MVP award for Exchange Server, Windows Server and Internet Information Server (IIS). Brien has served as CIO for a nationwide chain of hospitals and has been responsible for the Department of Information Management at Fort Knox. You can visit Brien’s personal website at www.brienposey.com.