Today, many data centers operate on a 24-hour schedule, and setting aside a designated backup window is simply no longer an option. As such, backups must be performed in a way that prevents them from becoming disruptive to the workloads that are running on the production servers. One way of accomplishing this is through a serverless backup.

The goal of a serverless backup is to remove the backup process from production servers, so that those servers are not impacted by the backup process. There are several different ways in which this can be accomplished. One of the most common methods involves the use of snapshots.

Although some vendors describe snapshots as a backup replacement technology, snapshots cannot replace backups by themselves because they are not an actual copy of data. However, snapshots can augment the backup process in a way that helps to minimize the impact on the production servers.

Regardless of which snapshot creation method is used, the first step in performing a serverless backup is creating the snapshot. Once the snapshot has been created, the snapshot is used to assist in the backup process. The actual method that is used varies from one vendor to the next. One common technique involves creating a differencing disk snapshot so that the data that is being backed up remains in a pristine state. After doing so, the data is replicated across the SAN to a dedicated LUN. When the replication process completes, the LUN contains an exact replica of the production LUN as it existed at the time that the snapshot was created.

Although the data has been replicated, it still needs to be backed up. One option is to copy the contents of the replica LUN to tape. In the case of virtual data centers, however, it is common to replicate the volumes containing virtual machines and then mount the virtual machine replicas within an isolated environment. That way, server-level backups can be performed against replicas of production servers without impacting the production environment in the process. Figure A shows how this process works. 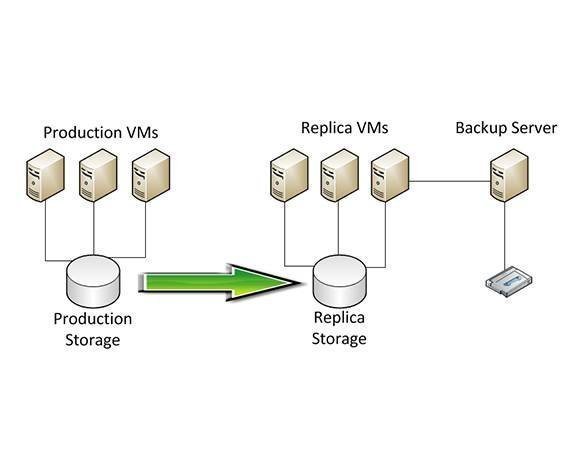 Another method that is sometimes used for performing serverless backups involves using a protocol called E-copy (or extended copy). The E-copy protocol is part of the SCSI command set and is used to facilitate device to device communications.

About the author: Brien M. Posey, MCSE, has received Microsoft’s MVP award for Exchange Server, Windows Server and Internet Information Server (IIS). Brien has served as CIO for a nationwide chain of hospitals and has been responsible for the Department of Information Management at Fort Knox. You can visit Brien's personal website at www.brienposey.com.