What you will learn in this tip: Microsoft System Center Virtual Machine Manager is an essential tool for anyone operating a data center with more than a handful of Hyper-V servers. The software can be used for creating, managing, optimizing and provisioning virtual machines across the entire organization. Learn how to back up Virtual Machine Manager in this tip, and how to perform a manual and a scripted backup.

Before I show you how to back up System Center Virtual Machine Manager, I need to point out that these backup techniques cannot be used to write a backup to a root directory because of software limitations. Furthermore, the service account under which SQL Server is running must have read/write access to the backup directory.

There are two main techniques for backing up System Center Virtual Machine Manager. The first of these techniques involves performing a manual backup through the administrative console. To do so, switch to Administration view and click the Back Up Virtual Machine Manager link, found in the Actions pane, as shown in the figure below (click on image for full size). After doing so, you will be prompted to enter a backup path, as shown in Figure 2. Simply enter a non-root path that your SQL Server has access to and the server will be backed up.

Figure 1: Click the "back up Virtual Machine Manager" link 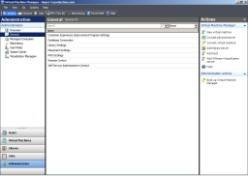 Figure 2: Enter a path for the backup

The commands used for backing up the server are:

You can see how these commands work in Figure 3 below. 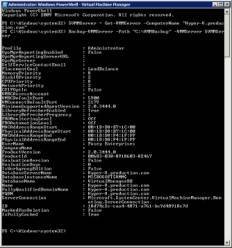 Microsoft provides a command line utility in System Center Virtual Machine Manager 2008 R2 that can be used to restore the database (this utility does not exist in the 2008 version). You would normally only do this if you needed to rebuild the server after a database crash or a hard disk failure. Assuming that you are restoring the database to the same server on which the backup was made, you will have to do a bit of housekeeping before performing the restoration. Essentially you will have to revert the server to its previous state this means that you must:

If you can’t perform these actions due to logistical issues, you can still restore the backup, but you will see messages such as "Needs Attention," "Missing" or "Host Not Responding" in relation to any mismatches that may exist.

If you are already backing up other SQL Servers, then the easiest way to back up System Center Virtual Machine Manager will probably be to use the same approach that you're already using for your other SQL Servers. However, if you want to perform a quick manual backup or if you lack a SQL-aware backup application then the methods that I have discussed will work well in a pinch.

About the author: Brien M. Posey, MCSE, has previously received Microsoft's MVP award for Exchange Server, Windows Server and Internet Information Server (IIS). Brien has served as CIO for a nationwide chain of hospitals and was once responsible for the Department of Information Management at Fort Knox. You can visit Brien's personal website at www.brienposey.com.