What you will learn in this tip: The Windows Wbadmin backup command can appear deceptively simple to use, and your options with it can be limited by the operating system version you’re running. In this tip, we’ll teach you the basics of using Wbadmin and its commands.

What you need to know about Wbadmin

Read this tip on Windows NTBackup

In fact, the Windows 7 version will not even let you configure a regularly scheduled backup.

What commands are supported?

Before you can use Wbadmin, you need to find out what commands are supported by your operating system. The easiest way to do so is to enter the WBADMIN /? command. Doing so causes Windows to display the available commands, as shown in Figure 1 below.

Figure 1: What commands are supported? 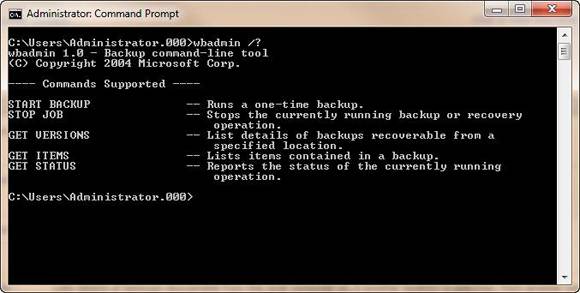 You can use the WBADMIN /? command to see what commands are supported.

The figure above was created from a machine that is running Windows 7. As you can see, Windows 7 only supports five Wbadmin commands. Even so, this screen makes it look as though using Wbadmin is simpler than it really is. For example, this screen would lead you to believe that you can run a one-time backup by simply typing WBADMIN START BACKUP. However, there is more to the process than meets the eye. After all, you need to be able to specify which files are included in the backup as well as the backup destination.

There are actually more than a dozen different command line switches that you can use to create a backup. The most important switches involve specifying the backup source and the backup target. If the backup is being written to a remote share, then you might also have to supply a set of credentials for the share. For example, a simple backup might use a command like this one:

In the command above, the "Backup Target" (in this case F:) is the location where the backup will be written. The “Include” switch tells Windows what to back up. In this case we are backing up C:, but we could just as easily backup multiple paths by separating each one with a comma. For example, suppose that you wanted to back up C: and the Temp folder on D:. You could do so by using a command like this one:

If you also wanted to include the system state in the backup then you could append the –SystemState switch to the command.

About the author: Brien M. Posey, MCSE, has received Microsoft's Most Valuable Professional Award four times for his work with Windows Server, IIS and Exchange Server. He has served as CIO for a nationwide chain of hospitals and healthcare facilities, and was once a network administrator for Fort Knox. You can visit his personal Web site at www.brienposey.com.